The mobile game industry is growing substantially. According to Statista, mobile games revenue in the U.S. reached a record 41.7 billion U.S. dollars in 2022. Mordor Intelligence states that “The Mobile Gaming Market is expected to register a CAGR of 12.5% during the forecast period, 2022 – 2027.” Game brands are striving to attract more players to lead the market and boost their revenues. Hence, certain trends occur:

How To Create A Mobile Hit Game: Success Insights

The Buildbox (video game software) founder, Trey Smith, shares some dev secrets on how to create a popular game focusing on the following issues:

Buildbox is a development platform enabling easier programming options. It facilitates game creation even without high level coding expertise. It has special tutorials and guides on how to deliver a hit game and it supports different platforms.

However, the simplicity of the platform does not impact the quality of products developed with these platforms. For example, some of the top downloaded games were developed using Unity. Unity is popular because it allows developers to create amazing 2D and 3D features and simplifies collaborative teamwork. World-famous games like Angry Birds 2 and Pokémon Go were developed on this platform. 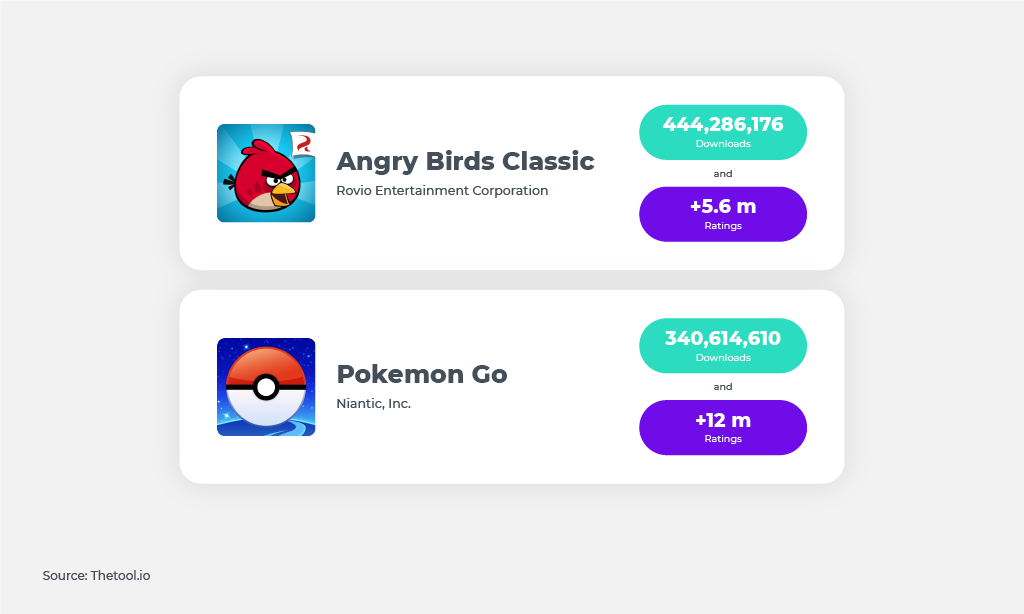 These characteristics are easier to achieve by using cross-platform game development engines. Developers can easily add new fun characters or “drag and drop” a challenging fight with the enemy. Using popular engines such as Buildbox, Unity, or Unreal Engine, a developer can design intriguing game stories by adding new objects and decorations, assembling challenging game scripts, and to test the game inside the platform.

Let’s discuss the most sought-after mobile game development engines, analyzing their pros and cons, specific features, and what development issues they are helpful with.

Unity As A Cross-Platform Game Engine

Unity is a professional-level video game engine. Hackingtons licensed California programming school arranged by the expert coders for kids outlines Unity as “Both too complex and too simple”, but at the same time “more than enough to create amazing 3D games”. They describe it as an “outstanding balance of expert options and easy usage”. Here are the pros of this engine:

Free Unity version is proposed alongside the more extended options $40-$200 Pro, Plus, or Enterprise edition.

Unity is a powerful cross-platform engine that allows our teams to work and iterate quickly. Easy to start and hard to master, Unity is fun to use across developers of various skillsets. Multi-platform development, the rapid evolution of the engine, development support, and huge community make Unity the engine of choice when we work on the next mobile game title.

In spite of all the positive features, some developers mark Unity as a product, which one can apply easily but it takes some time and effort to become a sophisticated user. They note it is not suitable for all the projects, especially when it comes to UI development, because UI solutions are not so automated and robust in Unity.

If one is striving for code clarity and plain architecture it can become a challenge with Unity if a developer does not have enough coding expertise. It takes some time to create perfect architecture because one needs to apply a number of design patterns and plugins. Unity also demands high process speed to function well on the PC. These facts lead to the conclusion Unity is good enough and provides useful features, but it’s not the universal one.

One advantage of Unreal Engine is its open-source free software. Outstanding photo assets are available for developers to perform stunning, close to reality, graphic pieces. Unreal is also presented as a good solution for mobile game optimization.

Since I have learned UE4, I cannot help but analyze games developed, shipped, and optimized with this amazing engine.

Moreover, this engine in comparison with Unity has an attractive pricing model: 5% royalty only when there is more than $1 million in gross revenue, which is quite convenient for starters.

From a coding standpoint, Unity applies C# and its own UnityScript; Unreal Engine uses C++. Unity seems better suited for smaller teams, while Unreal is tailored for collaborating on blockbuster creations like Sea of Thieves and Fortnite, which is more sophisticated work. Unity is not necessarily easier; it just seems to be more relevant to smaller teams and individual work.

Unity is great for building simple mobile apps, including prototypes and mobile AR/VR apps and offers the broadest available cross-platform support. Unreal is geared toward producing high quality graphics and the processing apps make it more suitable for AAA titles and games made for high-end devices.

Ultimately, engine choice depends on the kind of game you are going to develop, the expertise and size of your team, and the immersive assets and graphic details desired.

Solar 2D, formerly Corona SDK, is well-known for its free and outstanding 2D features. This engine is based on Lua scripting language aimed at creating lightweight, fast code.

Developers appreciate the committed and collaborative community of Solar 2D, which can be extremely helpful for those who are just starting in the game domain. A valuable feature of Solar 2D is a real-time simulation offering a look at your game after each rendering.

This platform contains no hidden charges, fees, or royalties, which make it a popular solution for speeding up the development process.

BuildBox is known as one of the best Android game maker environments. Capterra describes BuildBox as “a drag and drop game engine that anyone can use to create professional looking games”.

This platform is much spoken about concerning the most downloadable game creation. For example, Color Switch performed about 75 million downloads and its creation took less than a week. Buildbox is an excellent tool combining speedy development processes and enough tools to perform hit game art.

Apple launched this engine in 2013, and since then has been a valuable tool for those wanting to create a 2D game and launch right in iOS without needing extra plugins. Developers say SpriteKit’s virtual resources are enough to make the game development process not only smooth, but enjoyable.

Here is an example of a SpriteKit game hierarchy: 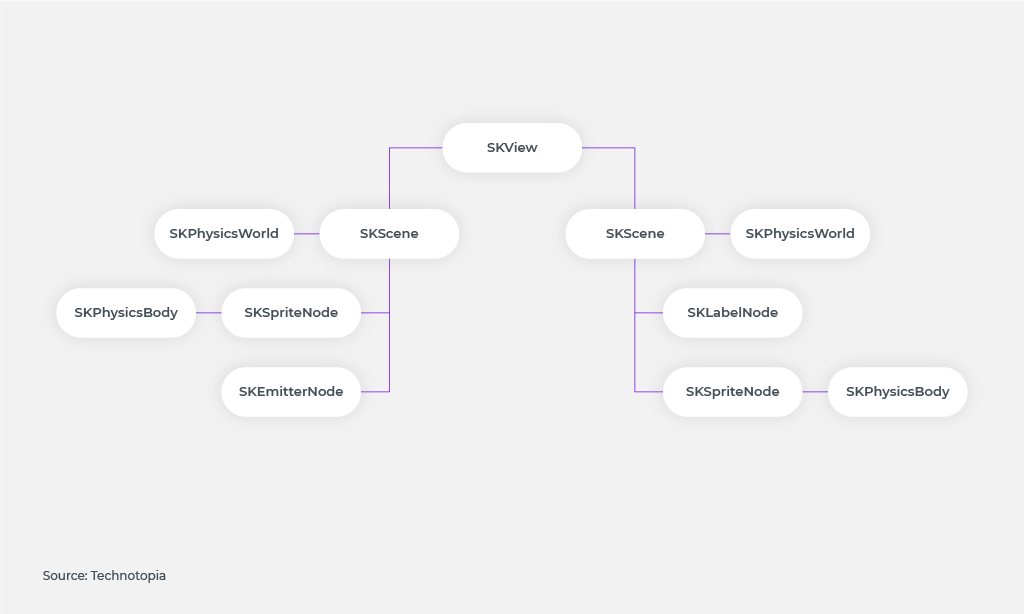 There are pros and cons to each of the available game engines and you should take some time to consider what works best for you and your team.

Check out the chart below for more details. 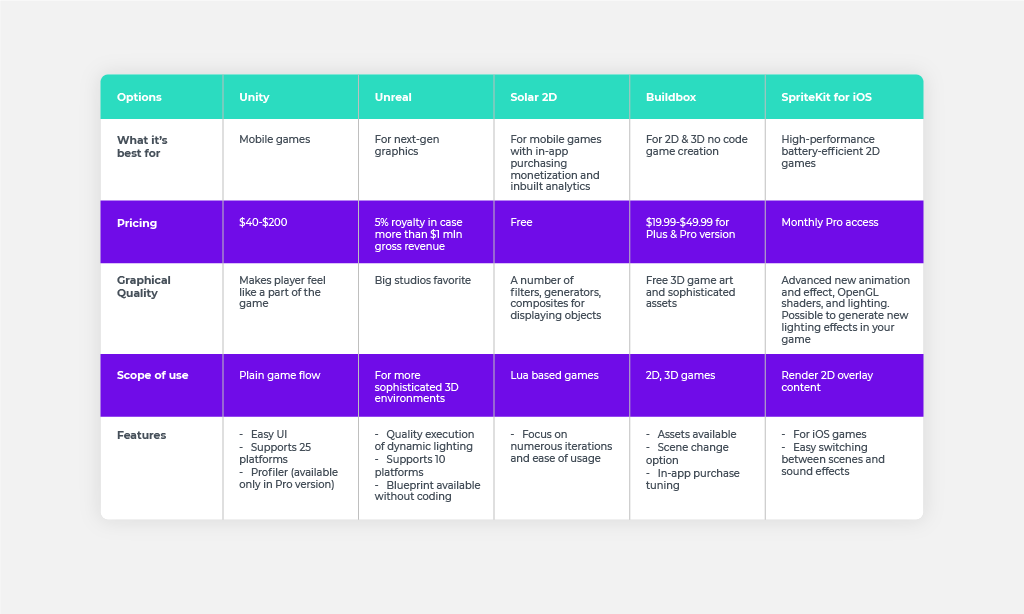 Mobile game development is a fast-growing niche because the number of individuals using smartphones is increasing greatly especially under a pandemic world situation and “stay-at-home” mode prompting to play more like a pastime.

Mobile game developers should be aware of the technical characteristics of the platform, smartphones’ graphic capacities, and market gameplay trends. Sometimes coding is not the key option in game creation. That is why game development engines come in handy to ease the process of game design. They propose audio and visual effects, ways of object display, animation pieces, in-app monetization options, and even the possibility to test the game before the release.

Of course, game engines are sets of ready-made unified solutions to develop hit games quickly. But it doesn’t mean any of the described platforms is perfect. Sometimes to meet your unique game vision it’s necessary to outsource an advanced professional team to perform high-end development and art.

You may also like:
iGaming Industry: The Biggest iGaming Achievement in 2022 and What to Expect in 2023
Mobile Game Development: A Trend that Isn’t Slowing Down
Top 5 Gaming Trends to Prepare for in 2023
Innovecs teams always keeps up with the news on the gaming market and know what is now demanded and competitive. That is why we decided to share modern gaming trends with our readers to show which gaming solutions can potentially bring high profits to your business. As Yahoo notes in its blog reasonably, “Being forced to shelter in place due to COVID-19 pandemic” people are playing more games of all kinds. The task of the business owner is just to understand what’s become the mainstream.
READY TO START YOUR PROJECT?
If you need assistance in building a product from scratch or supporting the existing one, drop us a line to discuss details, and we will reply within 24 hours.