Can you remember your first time playing a video game? Maybe it was on Sega or PlayStation. With trembling hands and blazing eyes, a 10-minute game could easily turn into a 5-hour contest, which stopped only after your mom’s final warning. Is there anyone who denies video games have changed our world once and for good? We guess no one thinks like that.

The global web development market has changed drastically from simple pixel arcades to realistic VR views. Games have managed not just to mimic reality but have become an indispensable part of it. All this is possible in many ways but not without the help of modern technologies.. 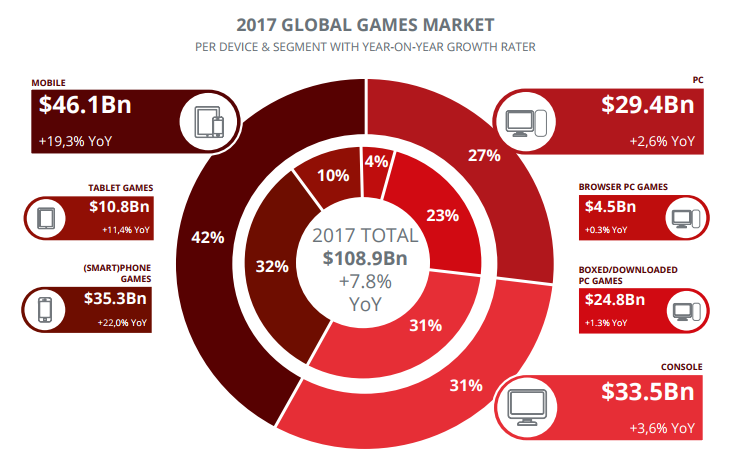 Nowadays, the gaming industry is one of the most actively expanding spheres in the world. And although there are still plenty of awesome, powerful consoles out there, mobile devices have started capturing a bigger segment of the industry with VR gaming not trailing far behind. Experts tout the further rise of VR mobile gaming popularity, and those who are already up on this will soon dominate the market. Meanwhile, we’re working seamlessly to keep you in tune with the leading gaming industry trends to help fantastic, elaborate products appear.

What will you find inside

Want to know more? Start your game design journey with reading this guide!

Bernard Marr, business and strategic performance consultant, AI & big data guru, said: “It’s worth following AI evolution and innovation issues in the gaming industry. Because it is the testing ground for the technology that will really influence everyday routine”. It’s quite an approach to the game development industry as the platform for testing technologies. …

Many video game development journeys start by answering the question, “Should we build our own in-house engine or use a pre-existing platform?” When choosing the second option, chances are you will decide to use Unity. John Riccitiello, CEO of Unity Technologies, can best explain why they are so popular. In 2018, he visited TechCrunch Disrupt …

In 2016, Instant Games was first released and in 2018 it officially opened up for developers. Once the two-year milestone was achieved, Facebook rolled up an update on the major platform’s numbers. Launched with only 20 games in just 30 countries, Facebook Instant Games has expanded to over 6,000 games with more than 20 billion …