The great debate of our time: which operating system is best for gaming? Truth is, both iOS and Android have advantages and limitations.

Most gamers have an opinion on the topic, and many of those opinions are subjective. So, let’s dig into some data about iOS vs Android gaming supported by opinions of the developers.

When it comes to the issue of iOS vs Android game development, it’s not enough just to consider user number statistics. As of July 2021, 70% of all mobile devices were running Android, and there were over one billion iPhone users. Android hit this benchmark in 2017.

When comparing iOS and Android game development, it’s best to shed some light on other aspects: hardware, marketplace, principles of monetization, models performance, and users’ expectations. In the future of gaming, these factors will influence the process of game publishing and monetization. 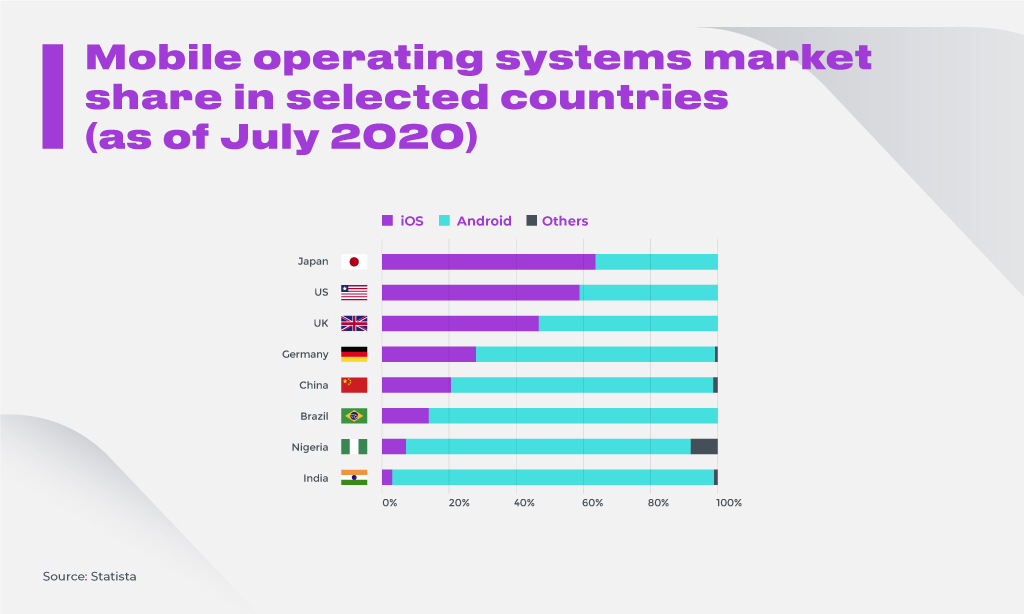 What is the difference between the business side and the development process on iOS and Android?

For publishing top titles, it can help to know the differences in business features and the development process of some types of online casino games.

Simon Joslin, the developer in the Voxel Agents, stated that hardware matters. He stressed that the iOS ecosystem had “excellent devices, operating system users keep up to date and a marketplace with the buyers willing to pay for the better gaming experience.” Considering the fact Apple devices are relatively homogeneous, publishers do not face so many bugs and the huge necessity of post-release fixes.

It seems before choosing which marketplace to develop for, it’s wise to compare specific features of iOS vs Android gaming and devices to aid in your decision-making.

Much of your in-game monetization and game publishing revenue will depend on your iOS and Android target audience and their expectations. iPhone users are more likely to make payments and purchases, however their registration rate is lower than that of Android users. iOS users spend more on clothing, cosmetics and tech products when compared to Android users. Moreover, due to Apple’s hand-curated showcase, titles are easier to find and download. The users of iOS-based devices experience less adware because of the App Store entry fee for the developers.

The above-mentioned facts make the Android store lack certain titles, which are more profitable to be provided for iOS users. But the medal has another side: this offers added potential for Android developers.

So, which one? Android vs iOS

Mobile gaming went from pixelated graphics to high-grade visuals granting exceptional user experience in less than a decade. Casual games, slots or online casino software, and mid-core games are now abundant for both Android and iOS and the tech for each is constantly evolving. Between the platforms, users convey positive and negative attributes for both.

Game availability on iOS and Android

Game availability for Google Play and the App Store differs. The App Store has more than four million apps, and over a million games. Google Play offers over 2 million apps; games make up over 20% of those. By sheer numbers, the App Store has much more to offer, but keep in mind that as of September 2022, Android controls the mobile OS market with a close to 71 percent share, while iOS accounted for around 28 percent of the mobile operating system market.

Everything from storage capacity, GPU, battery life, and FPS (frames per second) benchmarks impact user experience. And just like a PC, processor size will affect graphics display and lag time.

Android phones have several manufacturers and as such, differing specs and customizability that ranges across the board. Player needs are wide ranging as well, it often comes down to personal preference… a casual gamer won’t need as powerful of a processor as a hard-core gamer will.

Gameplay can suffer from lags and slow responses, especially if the game code is heavy or there was a lack of testing before release. Available hardware is an important factor to consider when choosing a platform for your future game.

Most game developers search for one platform to start with in game publishing. Often because of budget parameters, especially for Android QA due to the variety of devices on the market. When investing money in publishing a new title, game development teams should research release requirements, monetization success, and user attraction for each platform.

We’ve covered some of the basic differences to consider when choosing a platform:

Comparing Android with iOS, we come across a lot of tricky development issues. We can treat each issue as a positive or negative factor for game development. For example, the Apple ecosystem is more homogeneous, and this stability leaves less work for game developers in iterating, bug fixing, and QA. At the same time, the audience of iOS devices is not as vast as the Android one, which means less space for product promotion.

If you still have questions about which platform, either iOS or Android, is the best choice for your gaming releases, reach out for a consultation. Our super-talented team of artists and developers will assist in bringing your outstanding ideas to fruition.

You may also like:
VR is Smart Choice For Gambling Industry
Most up-and-coming concepts like Virtual Reality (VR) have mixed reviews. People either admire it or are uncertain about its future. But still, it can’t be ignored as it is a step forward and opens up many new and exciting opportunities. Add gambling to the industries it can be used at as virtual reality gambling is already bringing in rewards to early investors.
Digital Board Game Design: A Guideline
Top 5 Gaming Trends to Prepare for in 2023
Innovecs teams always keeps up with the news on the gaming market and know what is now demanded and competitive. That is why we decided to share modern gaming trends with our readers to show which gaming solutions can potentially bring high profits to your business. As Yahoo notes in its blog reasonably, “Being forced to shelter in place due to COVID-19 pandemic” people are playing more games of all kinds. The task of the business owner is just to understand what’s become the mainstream.
READY TO START YOUR PROJECT?
If you need assistance in building a product from scratch or supporting the existing one, drop us a line to discuss details, and we will reply within 24 hours.