Digital Board Game Design: A Guideline

There is something so intimate, cozy, and nostalgic about gathering with friends and family around a table to play board games. Nothing beats the connection and laughter that comes from an evening of Pictionary, Risk, or Scrabble. Board games have endured the test of time, but, as the world grows increasingly more digital, creative minds are bringing tech to the board game sector.

When the pandemic hit, many in-person gamers had to find a workaround to continue to pursue their favorite hobbies. Many game makers saw the opportunity for growth and quickly released digital versions of popular games that allowed families to play together without being in the same space. Now, as people have begun to gather again, we are seeing an interest in a hybrid approach to gaming with things like digital tabletops and downloadable ad-ons.

ReportLinker presents the expected growth of the board games market at a CAGR of 13% in 2021-2028 years. 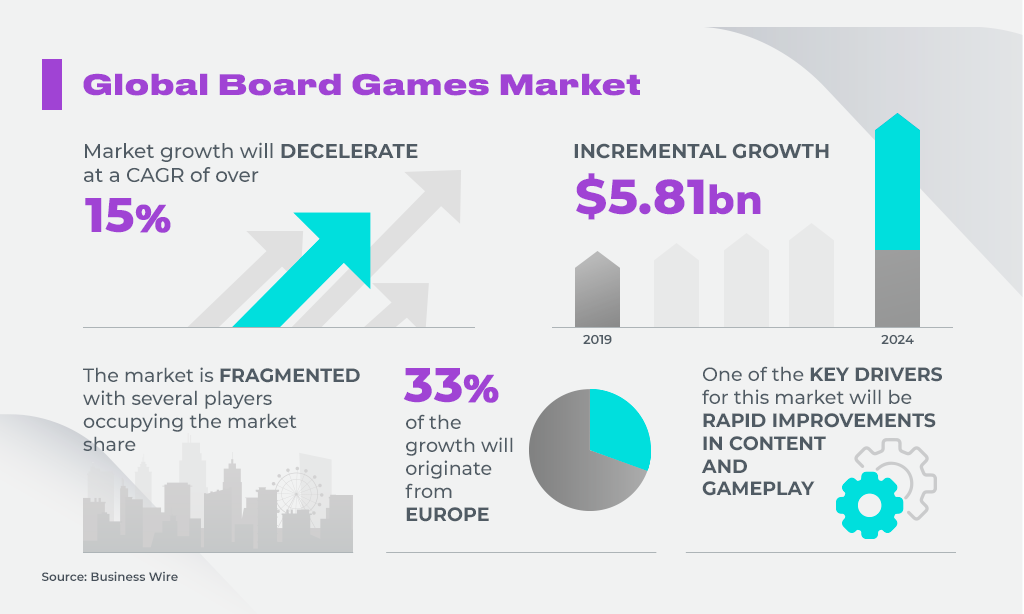 In our blog, you will find information about:

The Diversity of Board Games Genres: Choose the Most Appropriate for Your Business

The 3-minutes Board Games Community speaks about different board game types in this YouTube video. They distinguish:

No matter which game type you choose, identify more critical elements by removing one and analyzing how the gameplay will flow. Then, the game development process proceeds by eliminating and changing game elements to give deep insights into the game mechanics for a custom prototype design.

According to Statista, the gaming industry generated around $79 billion dollars in 2021. And every two days, publishers release a new game. Aurochdigital.com suggests a $50,000 minimum budget for game development as the cost for a solo developer working for a year on a game. They specify a publisher can extend the budget to make a top title allocating money for marketing, PR, and more precise testing.

Developing a Digital Board Game Concept and Prototype as the First Steps of the Journey: Challenges and Benchmarks

While playing and testing the prototype, developers can see if games have inconsistent narration: such as introducing a character and not involving them in gameplay, unused components throughout the gameplay, odd themes, or unnecessary achievements. Identifying these issues before the start of gaming software development is essential to prevent wasted time and funds. 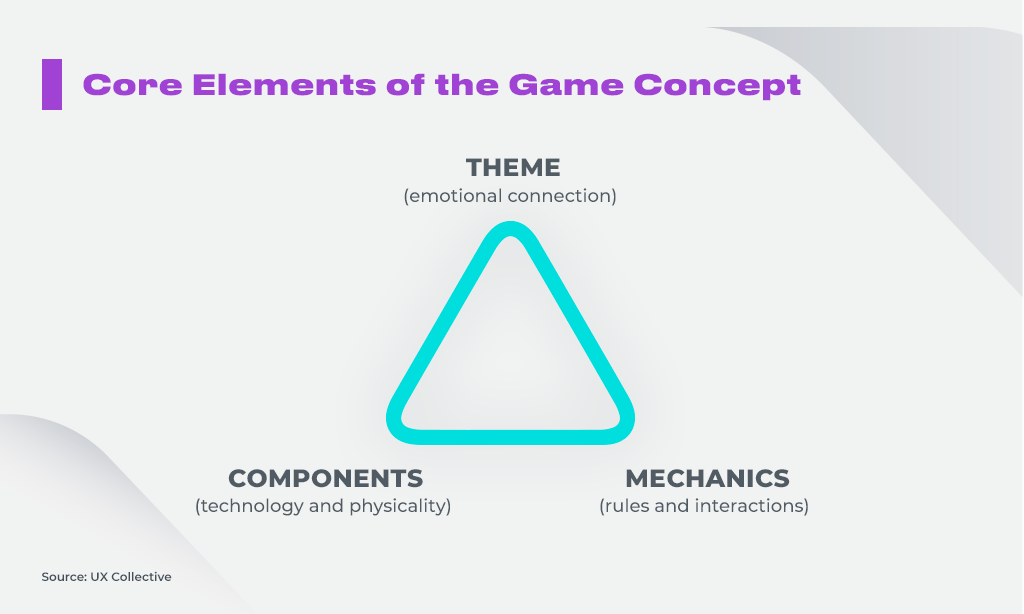 Prototyping of the game starts with analyzing these core fundamentals:

During game conceptualization, the designer chooses the core game adventure (mechanics) and decides whether it will be closer to a simulation (real world complexities) or abstraction (more simplicity). The development team gathers information about each game element relevant to the game experience we’re trying to emulate (movements, actions, fighters, clothes, or characters’ skills and abilities).

These core game components will make an MVP (minimum viable product), and the prototype is an idea translated into the game mechanics. The best way to test it is to play. For example, if your game involves energy management concepts (e.g., captain is striving to strengthen the shields), you should be sure all the possible actions (mechanisms) of obtaining the strength are in the toolbox.

Game design ideas come from different sources. Wiki even created the Game Ontology Project, a framework for describing, analyzing, and studying games. No matter where the idea comes from, two components are essential: rules and fiction. Rules (the principles controlling the gameplay) and game fiction (gameworld, settings, story and narration, characters) allow game designers the possibility to implement game interdependencies, interactions, and other mechanics. 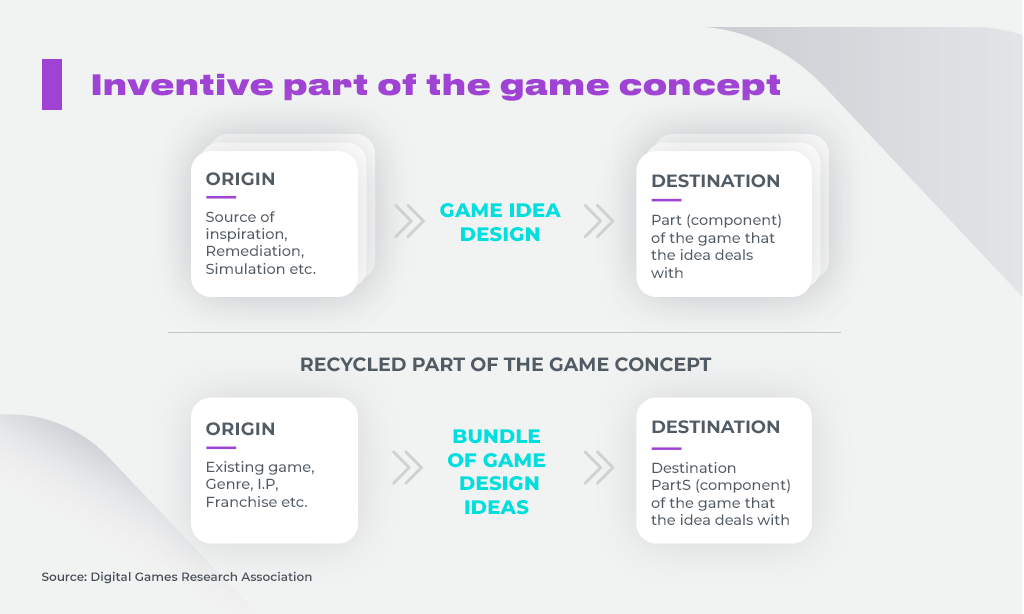 After conceptualization and prototyping, game documentation offers the following:

Board Game Development Lifecycle: After Conceptualization and Prototyping 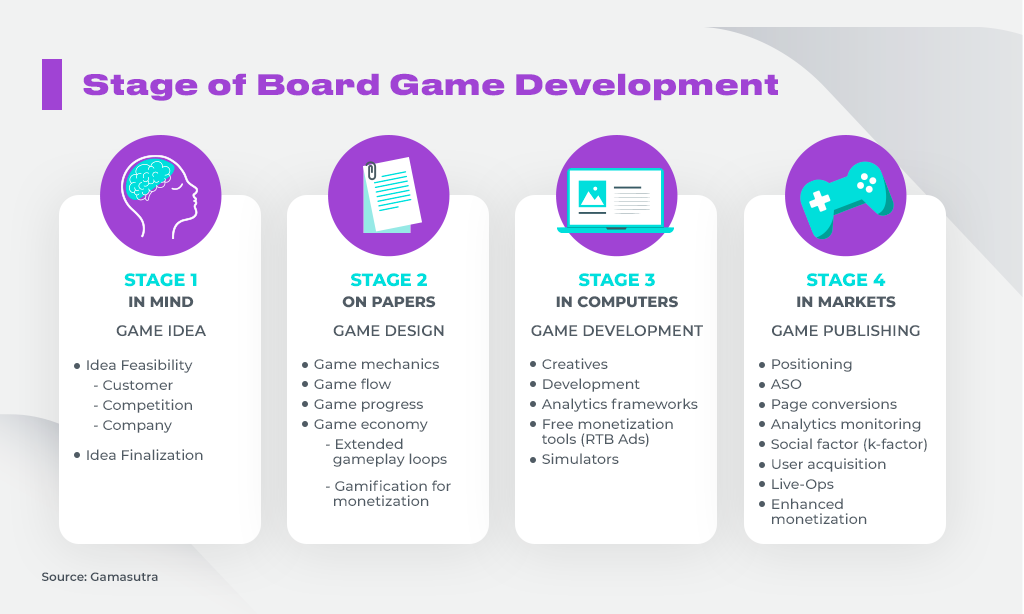 After creating game concepts and prototyping, game designers create the “vertical slice”, the smallest possible full version of the game – in which they’ve completed the basic game features in the draft (details are not specified if they do not influence the whole gameplay perception). Content production proceeds with the basic draft board game design, and it is the first full version available for public audience presentation.

During both stages of production (vertical slice and content production) and pre-launching, it’s worthwhile to start thinking about built-in monetization tools. You can use in-app ads, in-app purchases (e.g., players can buy more military pieces or shield strength features to succeed in the game), or utilize any subscription model.

After completion of the game production and pre-launch period, it’s time to think about the markets for the game release. You may consider an international online platform (e.g., Steam), introduction in a certain regional market, or the App Store or Google Play. Here, App-store Review Guidelines or Google Play Publishing Manuals come in handy to smooth the registration, publishing, and in-app monetization process management.

The post-production stage involves the “feature complete”, or Alpha, milestone. This can be both a cause for celebration and a stressful time for the game development team. If your team has run out of scheduled time or funds before the game is truly complete, the alpha version may be less than the desired product. Of course, it’s normal for some aspects of the original game version to be cut during post-production and the pre-launch period, but all art, sounds, and basic game mechanics should be fully implemented.

Your choice of a game development company is essential. Do your best to ensure the quality of an expert team, efficient collaborative company culture, and a suitable game development approach (e.g., Agile, Waterfall, or Spiral).

Once you have a digital board game idea, you can choose development team outsourcing or an extension of your own development department. During every stage of game development, the game concept, rules, and story should be meaningful, illicit positive gameplay experience, and retain loyal users through connection.

Throughout game conceptualization, your development team should remember that board game mechanics should be intuitive (not too complicated, but not easy and boring either), logical (no unnecessary features, or senseless actions), and incentivize in-game purchases.

No matter how complex your game development project is, a simple family board game or a cooperative, long-session strategy game, the development team follows a fixed set of stages:

If you wish to create a high-quality product, contact Innovecs with any questions you’d like to discuss.

You may also like:
Why Gaming Culture is Vital For Building Effective Gaming Business

The gaming culture is developing so rapidly that studies state the industry is going to hit the recording US$300 billion in the next 5 years. The number of players around the world has reached 2.5 billion, meaning that every third person on Earth plays some kind of game. The gaming sector attracts more and more […]

Sports Betting Algorithms: Opportunities for Your Business To Increase Revenue
Sports betting software as sophisticated forecasting algorithms is able to find beneficial opportunities for gambling businesses. It’s quite difficult to estimate the global betting market value because it’s not consistent with regulations worldwide. But Statista provides the following figures in 2020: the online gambling market is $58.9 bln and its gross win is $23.66 bln. Grand View Research predicts 11.5% betting market growth until 2027. They state that cost-effective mobile apps drive this growth significantly.
iGaming Industry: The Biggest iGaming Achievement in 2022 and What to Expect in 2023
READY TO START YOUR PROJECT?
If you need assistance in building a product from scratch or supporting the existing one, drop us a line to discuss details, and we will reply within 24 hours.