The HBS Digital Initiative at Harvard Business School names Unity “a unicorn” enabling video game development and the VR/AR economy to grow at explosive rates. The Unity Gaming Report 2022 showed that the number of games made with Unity increased by 93% in 2021, and the number of new creators increased by 31%.

Forbes talked to Jessica Lindl, Unity’s VP for Social Impact, to better understand how the Unity platform is inspiring game makers and programmers to create products that encourage social change. Jessica believes hiring skillful Unity game developers contributes not only to the company’s revenue and project outcomes but it empowers brands’ educational, cultural, and historical mission. She gave an example of ‘The Changing Same’, a tremendously powerful VR historical experience highlighting racial injustice. Unity believes game development platforms can, and will, change the world.

Moreover, Doug Dyer, former VP of Gaming and Entertainment at Innovecs, notes Unity is both a good option for starting out in the game development industry and the most popular engine driving cross-platform game evolution. 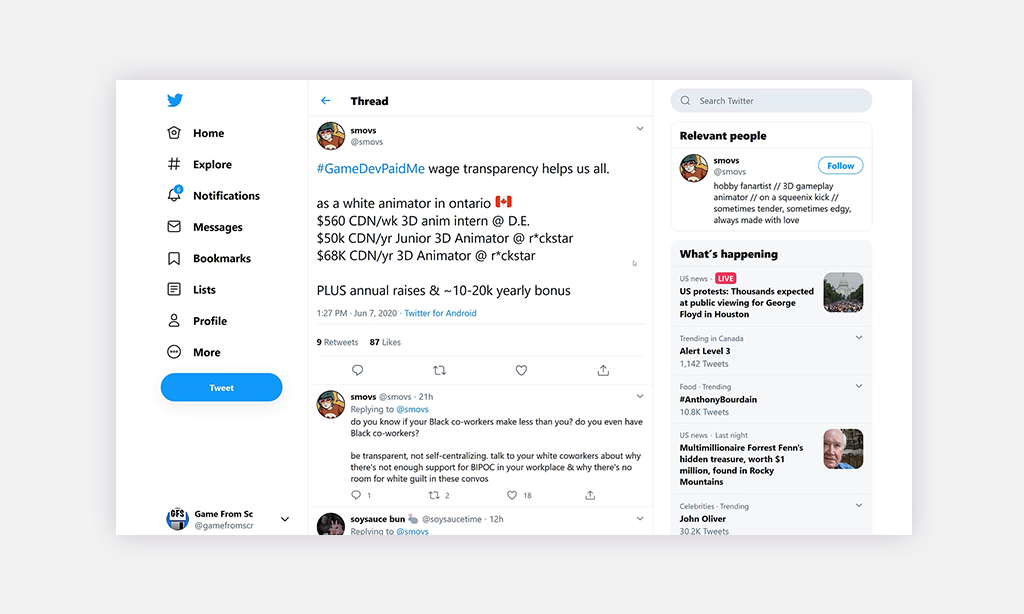 When you investigate Unity developer jobs statistics, it is easy to see that game developers in Ukraine are available at a reasonable price. The have a wide variety of skills, a creative mindset, and speak fluent English, which makes them competitive globally. 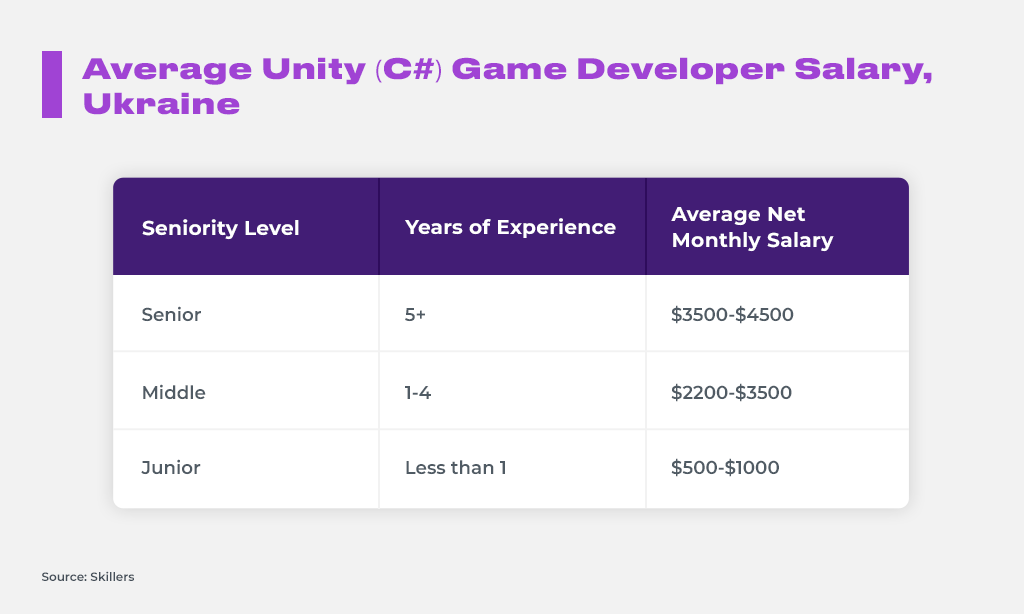 What Unity Developers of Tomorrow Are Expected to Propose

While Unity does not stop being one of the most demanded platforms for creative game companies and studios, it’s important to know what facts prove its great potential and capacity in the future. Unity 3D blog shares the following facts:

Unity is doing its best to provide the developers of the future with “stable and reliable releases”. With the newly arranged and updated tools, game devs have more opportunities for their artwork and gameplay. For example, many 2D animation and graphic improvements were done in March 2021, and worldbuilding options were updated. Unity devs are looking forward to getting renewed visual scripting package updates and texture import time optimizations. Also, gaining more convenient access to paid options will facilitate smooth and efficient utilization by the specialists.

In their 2022 Gaming Report, Unity said that “the number of games made on the Unity Platform increased by 93% in the last year.” This incredibly useful engine isn’t going anywhere.

What to expect from a Unity 3D developer specialist:

Every Unity developer is expected to be acquainted with all aspects of platform solutions available. These tools enable intriguing gameplay, unique graphics, and a captivating player experience. With the ready-made, fully customizable solutions, it may seem like anyone can create a top-notch game with Unity. But developers disagree. Many say, “it’s easy to learn Unity, but really hard to master its sophisticated features”. A company hiring a Unity 3D developer is looking for a specialist, someone that is aware of game solutions from concept to commercialization and able to use real-time tools for unlimited creativity.

“We want to meet future players where they really are. And we expect the developer to use outstanding Unity tools to the fullest as well as the platform optimization options”

The core qualifications for Innovecs Unity developers include:

Before hiring Unity developers in Ukraine, look through their portfolio, check expertise, style, and English proficiency, and ensure they are good fit for your project.

You can find trustworthy, expert IT companies on the market like Innovecs, we hire enthusiastic specialists that will enhance or build your game. To bring your game vision to life from script to screen, contact us.

We’ve discussed that the main task of Unity 3D developers is to turn your concept into a captivating game using Unity engine tools and C# programming language. As a Unity 3D game development company, Innovecs knows this technology potential.

For example, we provide high-quality Innocamp training with an opportunity for further internship upon completion. During the Innocamp workshops, students have the possibility to master Junior level Unity programming skills, increase IT English, as well as boost needed soft skills.

This or any other training track can increase opportunities for developers hired at a prosperous game development company.

Unity 3D is an outstanding growing platform for game development. It delivers a variety of solutions for ideal gameplay, capturing visualization, and smooth game iterations. Many companies are seeking expert Unity 3D game developers to hire. They offer changing rates from $2000 monthly in Ukraine to $98000 annually in the US. Rates vary depending on the location, specialist’s experience, and programming skills level. 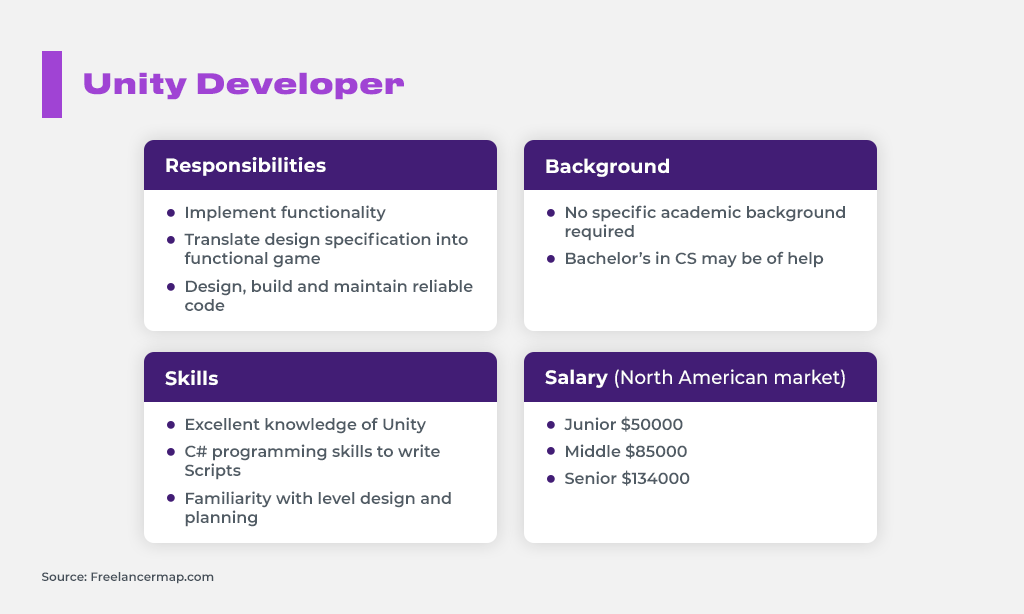 Many workshops and training programs are available to educate developers, like Innovecs Innocamp Unity Track.

We’ve outlined a portrait of Ukrainian Unity game developers available for hire on the market. A more detailed overall report on the characteristics, geographical spread around Ukraine, seniority levels, and salaries is available on Skillers recruiting agency’s website. They conducted a survey in September 2020 to demonstrate the Ukrainian game development specialist market.

You may also like:
iGaming Industry: The Biggest iGaming Achievement in 2022 and What to Expect in 2023
Mobile Game Development: A Trend that Isn’t Slowing Down
Top 5 Gaming Trends to Prepare for in 2023
Innovecs teams always keeps up with the news on the gaming market and know what is now demanded and competitive. That is why we decided to share modern gaming trends with our readers to show which gaming solutions can potentially bring high profits to your business. As Yahoo notes in its blog reasonably, “Being forced to shelter in place due to COVID-19 pandemic” people are playing more games of all kinds. The task of the business owner is just to understand what’s become the mainstream.
READY TO START YOUR PROJECT?
If you need assistance in building a product from scratch or supporting the existing one, drop us a line to discuss details, and we will reply within 24 hours.