Look! Up in the sky! It’s a bird. It’s a plane. It’s augmented reality

Today if you don’t want to be labeled as a “noob in the digital world”, you’d better know a thing or two about virtual, augmented or mixed realities. Many people in tech and creative industries are really excited about virtual reality (VR) platforms such as Oculus Rift, HTC Vive, Samsung Gear VR or upcoming PlayStation VR (launching in autumn 2016), as they are believed to change the ways we perceive information. But VR seems like to be an older sister who grew up and became just a “consumer proposition” with different headsets on the market, while her more popular sister augmented reality (AR) came a real “consumer phenomenon” with the launch of Pokemon GO. But will this take for long?

Expectations are high for the technologies: CCS Insight forecasts that shipments of VR and AR headsets could reach 96 million units by 2020, International Data Corporation projects the hardware shipments to surge past 110 million units in 2020, while Executive Vice President for Windows and Devices Group Terry Myerson says the market for VR devices solely is expected to be 80 million units per year by 2020. According to research by Digi-Capital in 2015, Augmented Reality and Virtual Reality are predicted to be a $150 billion industry by 2020. The study forecasts that AR will take the lion’s share around $120 billion and VR $30 billion. 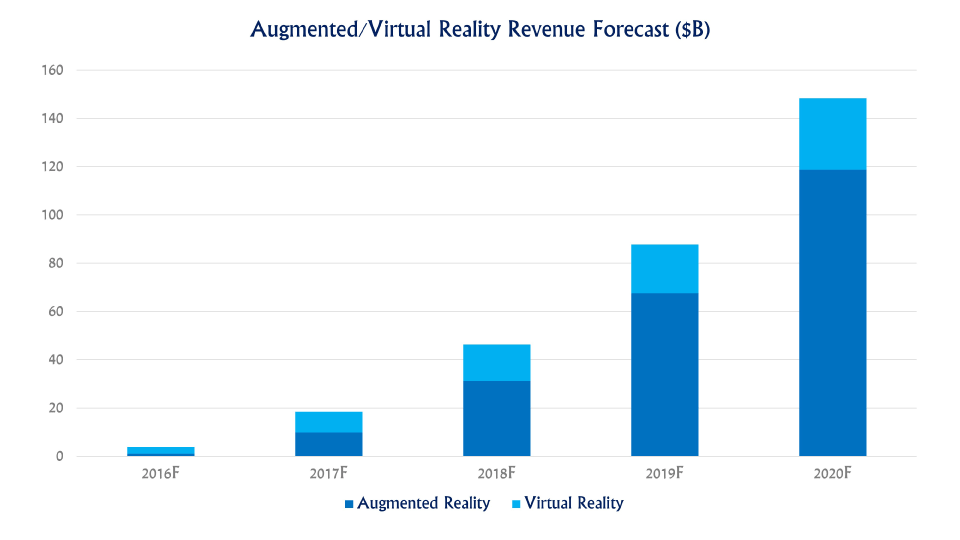 The main difference between these technologies is that virtual reality is completely immersive, it uses a headset to take you to entirely new worlds, and you are not particularly aware of the physical world. Augmented reality simply adds computer graphics onto the real world around you, allowing to see virtual objects while looking at real things.

CONTACT INNOVECS NOW!
Do you have an augmented reality app idea and need professional assistance?

The recent hype about Pokémon GO has drawn attention to the world of augmented reality, but we’ve been moving in the direction of screen-enhanced information for years. Over the past few decades, the term “augmented reality” has been applied to a few different technologies which make you see images and text information floating in front of you. This may require some sort of a headset with a projected display, for example, Google Glass, or use the camera and the screen of your mobile device. You get the idea if you’ve taken a selfie with Snapchat’s lenses or Masquerade (MSQRD) funny filters, which can distort your face and turn you into a monkey, a scary maniac or a beauty queen, just to name a few. Interestingly, Facebook bought Masquerade in March 2016 in the response to Snapchat’s acquisition of Looksery face modification app in September 2015. A novel example of the possibilities of augmented reality was introduced back in 2009 in the Yelp Monocle, a feature allowing to view businesses around you by using the camera on your device and pointing it at the surroundings.

Companies like Microsoft and Google are pouring millions of dollars into this technology. Both Microsoft’s headset HoloLens and Magic Leap’s unnamed device (backed by Google) put virtual objects onto the actual world, making you feel like Tony Stark.

This tech push is to show people how virtual objects can be integrated into real-world surroundings, not just an overlay of computer graphics. But Microsoft rejects to associate its HoloLens technology with the term “augmented reality”, tying it with the “mixed reality” instead. In such a way the company tries to distance from what Google Glass was. In fact, the term isn’t fresh at all, it was coined in the 1990s and simply represents another name for augmented reality, which merges the virtual and real worlds together with the use of VR technology (plainly, with a headset). Mixed reality allows users to interact with virtual objects in the real world through gestures and voice commands. In this way, the technology promises much more to the market than virtual reality.

Masquerade’s animated selfies and Pokemon GO show that people are likely to play with new technologies as long it does not require special hardware (headsets or head-mounted glasses). Mark Zuckerberg sees augmented reality going mainstream, as it uses smartphones as the consumer platform. So the consumers seem to have already chosen a live action over the computer generated 360-degree environment. As virtual reality is a fledgling market, businesses of all kinds – from architecture to product design – are trying to figure out how to leverage VR. It’s been around for more than 20 years, but most VR content is poorly executed. So there are several distinctive aspects to consider before jumping into the business of virtual reality software development:

Usually, technological innovation is only welcomed by early adopters, but sometimes large brands get into the game and technology snatches the attentions of millions. This is just the case of the Niantic’s creation. Pokemon is a great commercial brand used to make augmented reality accessible to anyone with a smartphone. Pokemon Go uses a combination of ordinary technologies built into smartphones, including location tracking and camera. In this case, you can even claim that Pokemon GO is not an example of augmented reality, but rather a location-based entertainment, as the visuals are not fully integrated into the real world, but placed onto the snap of the surroundings.

Niantic has been perfecting AR gaming since the 2012 release of Ingress, a game where players walk or drive around the real world to find and hack “portals”. In some way, Pokemon GO found its rise after this April Fool’s prank in 2014 and now it beats Tinder and Twitter by daily users. These purely virtual artifacts of Pokemon GO have that strange impact on the physical world, encouraging people to visit public landmarks, seeking virtual loot and collectible characters. Pokémon GO has broken through from a niche game for early adopters to something much bigger.

The idea with real-world games was to build an advertising model that doesn’t break the flow of the game. Pokemon GO implies an interesting type of sponsorships which increases foot traffic to the business places and gives gamers a reason to become paying customers. Moreover, businesses themselves sometimes offer discounts or special deals to the players on a specific team. It’s not a big surprise that Niantic plans to launch a VR game about Harry Potter to cover a new sector of fans.

Virtual and augmented realities have gone through the evolution process, and now a few startups are creating technology solutions for more serious purposes, which are a lot different from catching imaginary creatures. The field of augmented reality application is vast: from AR-enhanced sampling for clothing and makeup companies to virtual modeling of new properties for real-estate companies.

Virtual reality and augmented reality are both to add in experience-based learning and entertainment. Let’s take a look at some examples. In autumn 2015 Disney Research Zurich brought coloring books to life so that kids could see their characters in 3D. The app read 2D drawing and generated a 3D image on the screen.

Koski is a building blocks game that combines wooden blocks, magnets, and augmented reality. The player points an iPad camera at the platform and builds the world with interactive virtual characters.

Galaxy Explorer is an ongoing mixed reality project by Microsoft. This open-source HoloLens application lets users navigate the Milky Way with gestures and voice comments at their homes.

Project Esper helps learn all about the human body in mixed reality. Users can pull the human body apart and investigate organs and limbs piece by piece. Medical students can use it to study anatomy and doctors can also use it to explain medical issues to patients.

Moreover, virtual simulators in health are already being used by few innovative companies ImmersiveTouch and Medical Realities in surgical training, and by Psious and Bravemind for treating traumatic stress or psychological anxieties such as claustrophobia, fears related to flying or social activities like job interviews or dating.

CONTACT INNOVECS NOW!
Do you have a gaming app idea and need professional assistance?
Know someone who might be interested?
Share this article
Recent Articles
Top Mobile Game Engines 2021 To Design A Hit Game From Scratch

The mobile game industry is growing substantially. According to the Business of Apps resource, this industry showed a $77.2 billion turnover last year. And they report a 12% online players increase in 2020 in comparison with 2019 due to pandemic situations in the world. Game brands are striving to attract more players to lead the …

Game Testing: How To Make People Love Your Titles?

Experts from Braze, a mobile engagement automation company, define QA as a ‘key brand differentiator’. Quality improvements influence user experience and engagement, which are the key factors of game popularity. Appboy professionals release studies about app users retention stating that less than 25% of the first-day users got usually engaged and decided to play the …